"Prejudice Today and How to Respond: A Panel Discussion on Ways to Get Legally and Politically Involved," speakers Zahra Billoo, Avantika Rao, Fredericka McGee, '91, Dale McKinney and Jann Dorothy.

McGeorge's Diversity Week 2017, an Admissions/Diversity Initiatives Annual Program, hosted a full week of events from Feb. 13 to Feb. 17 on campus. The community events raised money for the McGeorge Faculty Diversity Scholarship and for WEAVE.

The theme for this year's Diversity Week was "Celebrating Diversity, Embracing Unity," and it kicked off on the Quad Monday, Feb. 13 with student diversity organization tables, cosponsored by LLSA. The event featured music by local artist Dinorah and lunch served by on-campus dining services Bon Appetit Café.

The evening of Feb. 13 BLSA hosted a discussion and showing of the 13th, a documentary about slavery, Jim Crow, criminalization and links in a chain of racial inequality, forged by political and economic motive. Associate Dean Raquel Aldana was joined by Professors Mike Vitiello and Cary Bricker in facilitating a discussion, and a few community members also attended the viewing and discussion.

Admissions and Diversity Initiatives Partnered with WEAVE to Walk a Mile in Her Shoes on Feb. 14. WEAVE is a local domestic violence, sexual assault, and sex trafficking agency, and Walk a Mile in Her Shoes is an international organization that invites and encourages men to stand up and take a stand in stopping violence against women. Associate Dean Aldana recruited a faculty team to walk for WEAVE that raised almost $1,000. A number of male faculty, staff and students walked a mile around campus in high heels accompanied by female faculty, staff and students who walked with them in solidarity and in flats. Those who registered and participated in the on campus WEAVE event are invited to participate in the Sacramento wide Walk a Mile event on May 6, 2017.

The Fourth Annual Diversity Week International Food Fair took place on Feb. 15. Several chartered student organizations, faculty, administration and staff contributed dishes unique to their culture and as a community raised $396 for the McGeorge Faculty Diversity Scholarship! Those funds will be matched dollar for dollar as part of the Powell Matching Gift Fund making the total raised at the food fair $792.

On the evening of Feb. 15, MESAA and JLSA jointly presented the event "Prejudice Today and How to Respond: A Panel Discussion on Ways to Get Legally and Politically Involved." The panel discussion brought together community leaders who actively fight against prejudice and hate crimes on a day to day basis, and through their expertise they helped to suggest effective ways law students, future lawyers, and the community can make a difference. The speakers included Fredericka McGee, '91, vice president of California Government Affairs & Operations, American Beverage Association; Zahra Billoo, executive director of the Council on American-Islamic Relations in the San Francisco Bay Area (CAIR-SFBA); Dale McKinney, vice president, Women's Civic Improvement Club of Sacramento, Inc.(WCIC); Jann Dorothy, president of the Sacramento Stonewall Democratic Club; and local attorney Avantika Rao.

Thursday, Feb. 16 featured two Diversity Week events. Molly Stafford, Director of Career Development Office, presented "Salary Negotiations for Women" in conjunction with the McGeorge Women's Caucus during lunch. There was a short TED Talk on the five characteristics of good negotiation. The group also talked about negotiating things other than salary, such as benefits, flexible schedule, work-related technology, vacation, professional development, and more.

Professor Larry Levine and the McGeorge Lambda Law Students Association invited Kate Kendall, executive director for the National Center for Lesbian Rights (NCLR), to speak about "Protecting and Expanding LGBT Rights in the Trump Era" on the evening of Feb. 16. After her formal presentation Kendall stayed behind to continue the conversation with Professor Levine's "Sexual Orientation and Gender Identity Law" class. Attendees of the program were invited to sit in on the class as well.

The evening of Friday, Feb. 17 marked the end of Diversity Week 2017 with Annual Culture Night in the Student Center. There were food, drinks, auction items and fun! Alumni, faculty, staff and students mingled and networked. Guest speaker Kristene Mapile, '04 spoke to the group about her work in the Assembly Health Committee at the Capitol. 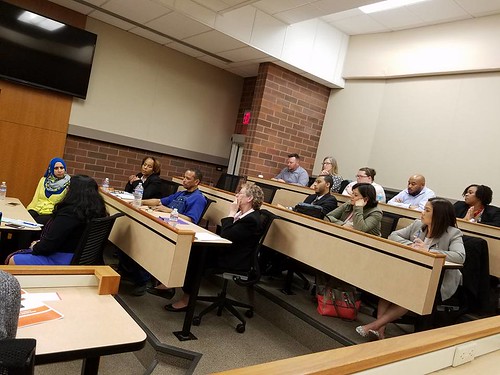