Professor Omar Dajani, a leading expert on legal aspects of the Palestinian-Israeli conflict, has convened a workshop on the topic of "From Revolution to Devolution? The Future of The State in The Middle East," held at McGeorge on May 26, 2017.

In the workshop, the first in a two-part symposium co-convened by the Global Center at McGeorge School of Law and the Center for Near Eastern Studies at UCLA, an interdisciplinary group of scholars and practitioners explored the question "Can federalism - or other forms of decentralization - help to manage or resolve identity conflicts in the Middle East? "examined dilemmas presented by decentralization in Syria, Israel/Palestine, Turkey, and the Gulf and drawing comparatively on experience elsewhere in the world.

Earlier in May, Professor Dajani spoke at two programs featuring his work.

On Thursday, May 18, 2017, he gave a lecture, "Finding Peace in the Shade of the Law: Roles of International Law in Palestinian-Israeli Peace Talks" as part of the Fried-Gal Colloquium on Transitional Justice at the Hebrew University of Jerusalem.

On Monday, May 22, 2017, he presented a paper, "Tantamount to De Facto Annexation? Israel's Settlement Enterprise at Fifty," at the ICRC/Minerva Center for Human Rights conference, "50 Years After 1967: Evaluating the Past, Present, and Future of the Law of Belligerent Occupation" at Tel Aviv University. He appeared on a panel chaired by Professor Ruti Teitel and also featuring Luis Moreno Ocampo, Former Chief Prosecutor, International Criminal Court. 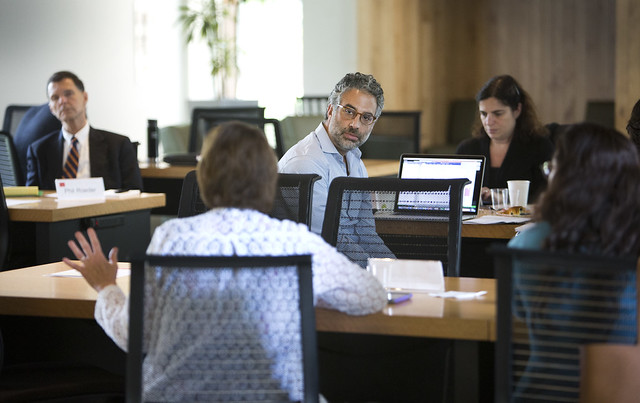