The year 2016 is the quincentennial of Thomas More's UTOPIA. UTOPIA500 was an interdisciplinary series of events held at McGeorge School of Law during spring semester 2016 honoring the author and his iconic work, organized by Distinguished Professor Dr. Michael P. Malloy.

The UTOPIA500 events were held on Thursdays in Classroom E during the meetings of the Law and Literature seminar. Students in the Law and Literature seminar also made presentations throughout the semester. Presentations in UTOPIA500 will be included in the publication of a symposium issue of the University of the Pacific Law Review in the Fall 2016.

Dr. Malloy kicked off the UTOPIA500 project with a presentation on Jan. 21, 2016. His paper, Utopia and the Law and Literature Movement, marked the quincentennial of the publication of Thomas More's novel Utopia in 1516. Dr. Malloy explored the meaning and implications of the concepts of utopia and dystopia. He argued, with colorful graphic support, that More's novel was a precursor to post-modernist literature, and that in our own time there has been a linguistic transformation of the concept of utopia to contemporary meanings that are often entirely independent of More's novel. Dr. Malloy concluded that More's novel is a richer and more sophisticated literary achievement than we may realize, but that it has been obscured by the "kidnapping of the concept utopia" by both literary successors and popular culture.

The second UTOPIA500 presentation was Feb. 11, 2016. Daniel J. Morrissey, Professor of Law and Dean emeritus at Gonzaga University School of Law, received an official "Me and Tommy More" polo shirt from Dr. Malloy at the beginning of the talk. Professor Morrissey then spoke about More's Utopia and Income Inequality. A published scholar of corporate securities law and jurisprudence, Professor Morrissey identified legal, political, and moral issues about social and economic inequality in late medieval England, as reflected in More's Utopia, and discussed the continuing relevance of those issues today. He sparked an animated discussion with the Law and Literature students.

The third UTOPIA500 presentation was Feb. 25, 2016. Dr. Andreea D. Boboc, English professor in the College of the Pacific, received an official "Me and Tommy More" polo shirt from McGeorge's Dean Francis J. Mootz III. She then spoke about Legal Personhood in More's Utopia. A published scholar of medieval English literature, Dr. Boboc explored how the fluidity and multiple jurisdictional levels of law in late medieval England shaped personhood. She had a compelling and provocative interchange with the Law and Literature students.

The fourth UTOPIA500 presentation was march 10, 2016. Dr. David R. Papke, Professor of Law at Marquette University Law School, received an official "Me and Tommy More" polo shirt from Dr. Malloy. Dr. Papke then spoke about The Communistic Inclinations of Sir Thomas More. A well-known scholar of legal history and law in popular culture, Dr. Papke noted the affinity that existed between the themes in Utopia and the views of Karl Marx as well as those of leaders of the Bolshevik Revolution. He also explored the problem of competing approaches to literary analysis and criticism - whether to seek out an author's intentions or the resonance of a work among its readers over time. This prompted a lively discussion with the Law and Literature students about the continuing impact and relevance of Utopia, 500 years after its first publication.

The fifth UTOPIA500 presentation was April 7, 2016 about St. Thomas More and his Utopia in Antebellum American Lawyers' Thought. A former dean at Kansas Law and a renowned historian of colonial and pre-Civil War America, Professor Michael H. Hoeflich is also a fellow of the Royal Historical Society. He explored the publication history of More's UTOPIA, and the extent to which editions of the book were available in antebellum America. Professor Hoeflich noted that the novel, as a work of "politics," was well known by the likes of Jefferson, Madison, and John Adams, but its influence thereafter ebbed and flowed, until it regained its unquestioned prominence in the Twentieth Century.

The sixth and final UTOPIA500 presentation was April 21, 2016. Professor Susan Herman, Centennial Professor of Law at Brooklyn Law School and President of the American Civil Liberties Union, received the official "Me and Tommy More" polo shirt from Dr. Michael P. Malloy, organizer of the UTOPIA500 project. Professor Herman delivered a presentation on Constitutional Utopianism. She explored the literary devices that More employed as narrative strategies in Utopia, and argued that his intention may have been to give focus to discussion about important issues of governance and societal structures, rather than to provide definitive answers. Professor Herman also compared the implicit social values evident in Utopian society and in American society, each governed by its own constitution. She suggested that Utopians seemed to prize radical equality over personal liberty, while the U.S. Constitution has been interpreted to favor liberty over equality. Her insights prompted a lively discussion with the Law and Literature seminar students. 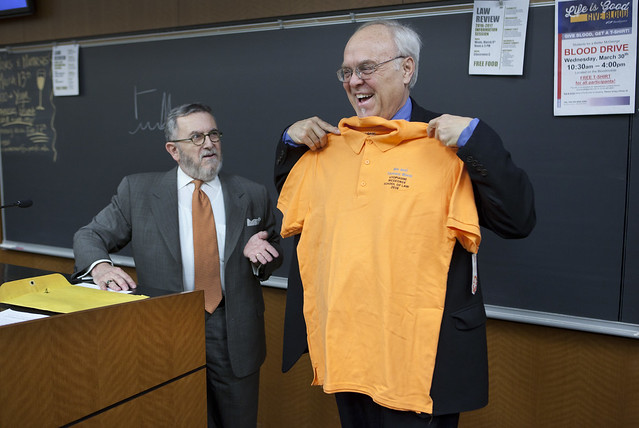