McGeorge School of Law, University of the Pacific awarded 148 Juris Doctorate (JD) degrees, 25 Masters of Laws (LLM) degrees, eight Master of Science in Law (MSL) degrees and one Doctor of Juridical Science (JSD) degree to culminate its 92nd academic year at the graduation ceremony of the law school on May 21, 2016. Dean Francis J. Mootz III presided over the ceremony, and University President Dr. Pamela A. Eibeck joined him in the platform party. Kevin M. Nagle gave the commencement address. Nagle is an owner of the Sacramento Kings basketball team and majority owner of the Sacramento Republic FC minor league soccer club.

The Commencement ceremony was held at the Memorial Auditorium in Downtown Sacramento.

Also recognized at the Graduate Luncheon were the Julie Davies Professors of the Year: Professor Larry Levine (Day) and Professor John Myers (Evening). The SBA's annual Professor of the Year Award is named the Julie Davies Professor of the Year Award in appreciation for Professor Davies' dedicated service to McGeorge as Associate Dean for Academic Affairs from 2009 to 2013, and her steadfast commitment to outstanding teaching, learning, and assessment. The SBA's annual Anna Rose Fischer Award is given to an outstanding member of the McGeorge staff or administration who, in the course of their employment, has performed above and beyond their job responsibilities, thereby immeasurably aiding and assisting the McGeorge Student Body. The Anna Rose Fischer Staff Member of the Year was Joe Pinkas, Financial Aid.

On May 20, 2016, The McGeorge Chapter of the Order of the Coif inducted 15 new members from the Class of 2016. Fair Political Practices Commission Chair Jodi Remke, '91, gave the keynote address to the new members. 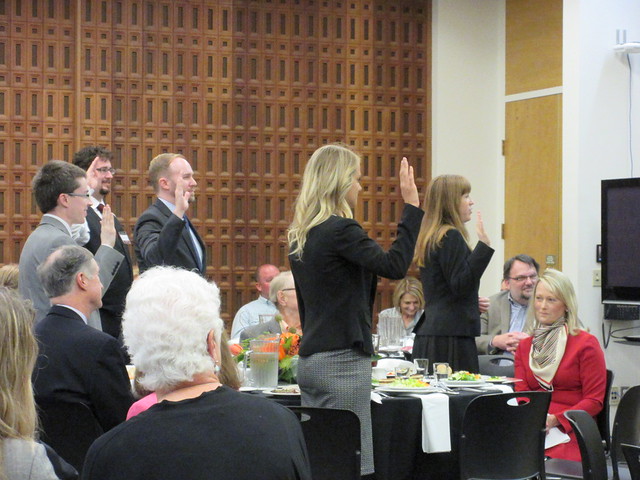