Diversity week 2016: Excellence through Inclusion kicked off with a Diversity Week Fashion Show celebrating the culture and diversity of our student body. Middle Eastern & South Asian Student Association President, Ala Rasheed, '2L, served as the master of ceremonies. Associate Dean Michael Colatrella and alumnus, Hector Avila, '03, both offered perspective at the event about the importance of diversity in the legal profession and at McGeorge.

On day two Latino/a Law Students Association hosted a voter registration drive and a soon-to-be-formed student organization, Students for Reproductive Justice, hosted a program on reproductive justice and why it matters, entitled "Reproductive Justice 101." The Third Annual Diversity Week International Food Fair took place on day three. Several chartered student organizations, faculty, administration and staff contributed dishes unique to their culture and as a community raised $405 for the Diversity Scholarship! Those funds will be matched dollar for dollar.

On day four leading up to the capstone Brubeck event, faculty, staff, students and community members gathered for a talk on Black Lives Matter sponsored by the Black Law Students Association and featuring UCLA Professor of Law Devon Carbado. Professor Carbado engaged the audience in a discussion on the psychology of police violence and solutions moving forward. Students then spent the evening at Jensai Sushi in midtown at a Cultural Diversity Mixer hosted by the Asian Pacific Islander Law Student Association.

The final Diversity Week event, An Evening with the Brubeck Institute Jazz Faculty, was sponsored by the McGeorge Alumni Board and the Diversity Affairs Committee. More than 100 members of the McGeorge community came together to celebrate four recent Diversity Scholarships, dedicating support to students with financial need and a proven record of service to underrepresented communities. The evening's special keynote speaker was McGeorge Alum, Brian Tippens,'00, Chief Diversity Officer for Hewlett-Packard Enterprises, and his remarks inspired the celebrants to continue creating a campus of inclusion. McGeorge welcomed the most diverse incoming class in McGeorge history in fall 2015, with 49 percent of the class representing ethnic/racial diversity, up from 45 percent in 2014.

The Scholarships
The Jane Kelso Diversity Endowed Scholarship and McGeorge Faculty Diversity Endowed Scholarship were endowed in spring 2015 at $50,000 each, and with the Powell Match gift fund 1:1 match, the total of those two scholarships was raised to $200,000. Two new scholarships were announced at the Diversity Week 2016 reception: one by Dean Francis J. Mootz III and his wife Leticia Saucedo, and a second by University of the Pacific Regent Hayne Moyer, '75, and his wife Susan Moyer. Both of these new $50,000 scholarships were matched by the Powell gift fund, bringing the total of each to $100,000. In one year's time, McGeorge community members have built more than $400,000 in scholarships dedicated to diversity.

Each of the four recent diversity scholarship endowments provides scholarships to incoming and current students who are members of historically underrepresented groups in the legal profession; who will add to the diversity of the McGeorge student body and legal community; and/or who have shown a strong commitment to underrepresented groups before entering law school. Gifts to any of these four funds will continue to be matched until Powell Match gift funds run out. 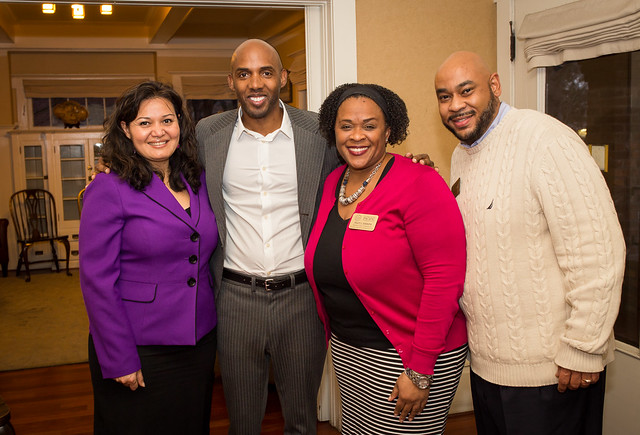