McGeorge School of Law celebrated recent law school graduates who passed the State Bar of California's July 2015 examination at the 15th annual Swearing-In Ceremony on Dec. 3, 2015, in the Lecture Hall.

Associate Justices Ronald Robie, '67, and Andrea Hoch, '84, of the California Court of Appeal, Third Appellate District, officiated as the oath of membership was administered for the State Bar by clerk/administrator Deena C. Fawcett. Chief Judge Morrison England, '83, of the U.S. District Court, Eastern District of California, administered the oath for the federal bar. Sixty-three alumni were sworn in during the ceremony.

Dean Francis J. Mootz III welcomed the new attorneys into the profession. "We are very proud of all of you here today," he said. "Take seriously your role as a guardian of justice, and remember your law school is here to support you on the rest of your journey."

The alumni who attended the McGeorge Swearing-In Ceremony were part of a larger group (130) of McGeorge graduates who passed the July 2015 California state bar examination, the results of which were released on Nov. 20, 2015. The July 2015 bar pass rate for McGeorge graduates increased by 9 percentage points compared to July 2014, despite the lowest California Bar pass rate in three decades. Many others took their oaths in other parts of the state. McGeorge alumni also passed 2015 bar exams in Georgia, Minnesota, Missouri, Nevada, New Mexico, New York, Pennsylvania, Utah and Washington. Hundreds of friends and family also attended the formal celebration.

McGeorge placed tenth out of the 21 California law schools approved by the American Bar Association. 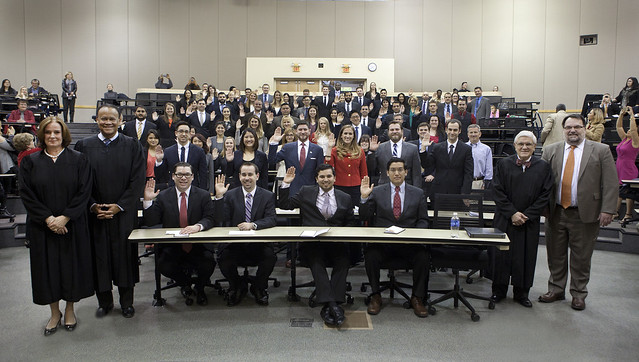