The McGeorge Moot Court team capped off a successful fall 2014 campaign with a flurry of best brief awards, oralist awards and by earning a trip to the championship finals of the 66th Annual National Moot Court competition February 2015 in New York.

Jackie Hang, Annette Rose and Suzan Karayel won the NTC Region 12 competition, which was held Nov. 14-15 in San Francisco. Hang was named the top advocate of the regional, which was hosted by Hastings. Another McGeorge team, Shay Billington, Andrew Naylor and Janelle Covington, made it to regional quarterfinals of that event, which is sponsored by the New York City Bar Association. Professor Ed Telfeyan and Etan Zaitsu, '12, coached the teams with honors board member Jennifer Domer providing assistance.

A week earlier, Maricar Pascual was named the Best Oralist and her teammate, Caroline Soto, received the Second Oralist award at the national finals of the 22nd Annual Thomas Tang National Moot Court Competition in Phoenix, Arizona. That was a rare one-two finish for individuals from a quarterfinalist team in a national event as they repeated their strong performances at an October regional hosted by McGeorge. Professor Hether Macfarlane and Erich Shiners, '06, coached the team. South Texas defeated St. John's in the finals of the tournament, which was held in conjunction with the National Asian Pacific American Bar Association's annual convention.

That same weekend, Ryan Hawley-Jones and Matt Chen took home second-place hardware in the best brief competition at the USD National Criminal Procedure Tournament in San Diego. Telfeyan, the director of the McGeorge Moot Court Program, and Gil Vega '10, coached the team. Southern Methodist defeated Hastings in the final round.

"Our Moot Court Honors Board members certainly made us proud the past few weeks," Telfeyan said "Thanks to all the faculty, students, and coaches who participated in practice rounds or in advising team members on substance. It was a real McGeorge community effort." 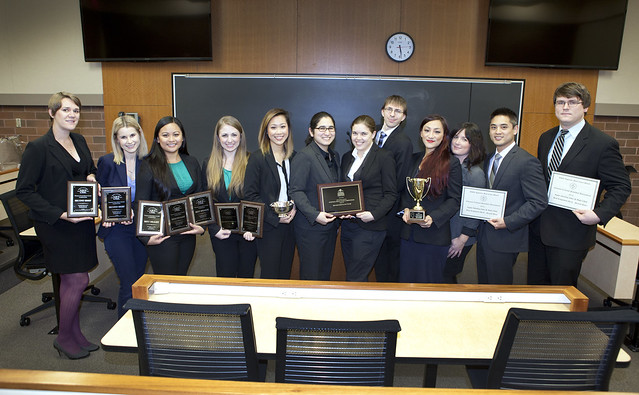